St. John of God Retirement and Care Center has served the people of Southern California for over 70 years. It was founded by the Hospitaller Brothers of St. John of God, a 500 year-old Order of healthcare providers who care for the sick, the poor, and those in need of healing. In April of 1942, Brother Mathias Barret, O.H., Brother John Calybit Dubuc, O.H., Brother Leonard Mondat, O.H., Brother Andrew Aucoin, O.H., and Brother Vincent de Paul Rapin, O.H. formed the first Brothers’ community at St. John of God Retirement and Care Center. The purchase of the various properties that consist of today’s campus started in May of 1943. The Brothers acquired the first permanent property at the corner of Western and Adams, known as the Fitzgerald residence. It was known as Mount Saint John of God and was dedicated as a novitiate, hospital and sanitarium on July 11, 1943. This would be the beginning of the present day campus of St. John of God Retirement and Care Center. In October of 1944, the Mac Donald house located adjacent to the Fitzgerald residence was acquired by the Brothers and used as their residence. In September of 1948, the Brothers acquired the Sumner property followed by Lot 7 of the Adams Place tract in 1951, which was adjacent to the other parcels at Adams and Western, from Margaret Anthony. On January 18, 1949, the Bayley property at 2460 South St. Andrews Place was purchased for $60,000.00 for the future Care Center site.

In 1953, the Brothers constructed the first nursing hospital building with 60 licensed skilled nursing beds. The groundbreaking ceremony took place in 1959 with Brother Anthony Scully, O.H. as the administrator. Today, this part of the building is the entrance to the Skilled Nursing Facility where the front lobby and administration wing are located. In May of the same year, a cornerstone blessing ceremony was given by Archbishop James Francis McIntyre. In 1972, work started on the present day Skilled Nursing Facility and a year later residents were moved into the newly constructed 160 bed St. John of God Care Center. Cardinal Timothy Manning blessed the Care Center along with its chapel that was donated by Frank Muller in memory of his parents, Walter and Marite Muller.

Following the opening of the Care Center, the Brothers expanded their services by opening the St. John Grande Apartments on January 19, 1990 with the Mayor of Los Angeles, Tom Bradley attending the opening ceremony. On September 8, 1999, a groundbreaking ceremony was held for the St. Richard Pampuri Apartments, to provide assisted living services for the seniors of the Los Angeles County. The Blessing and Dedication Ceremony for the St. Richard Pampuri Apartments was held in the Perricone Courtyard on May 2, 2002. St. John of God Retirement and Care Center completed its expansion on March 15, 2008 when the St. Benedict Menni facility was opened and blessed. This assisted living facility was dedicated for people with Alzheimer’s disease and memory loss.

In the early years, Brother Patrick Corr, O.H., the first Provincial, orchestrated the collaboration of the leadership team and the Brothers of St. John of God along with the various Administrative Staff and Board Members of the Hospitaller Foundation of California, to complete the vision of this continuum of care you see on the campus today. The story of the growth and development of St. John of God Retirement and Care Center has been a journey of care and compassion, love and commitment, embarked upon by many generous people who gave their personal time and resources to meet the needs of the elderly in Los Angeles. In 2015, the St. John Grande Apartments were licensed and dedicated for assisted living care and the blessing took place on June 3, 2015, the feast of St. John Grande. 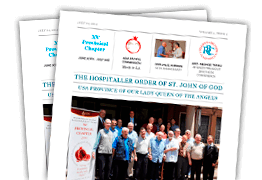